Huckleberry was one of over 30 dogs who came down from Leech Lake Reservation on November 8th as part of a humane investigation. From the get-go this charmer won the hearts of the staff at the Animal Humane Society/AHS. Our friends at AHS told us he was the most friendly and outgoing of the bunch! Most of the others were so fearful of people and had to go through AHS' Ad Prep program for shy and fearful dogs.

Unfortunately when Huckleberry was evaluated it was determined that he had some pretty serious dog aggression issues and unfortunately was not able to be placed up for adoption at AHS. We were contacted to see if we could find a rescue that could take him in and work with him. We reached out to our usual network of rescues and unfortunately no one was able to help. Most rescues and shelters are unable to take in dogs with dog-to-dog aggression issues as their fosters have other dogs, and many shelters simply aren't able to take in dogs with dog aggression issues. AHS also reached out to their partner rescues/shelters in hopes that they could find a group able to take and work with Huckleberry. After one of our Leech Lake Reservation transports, our main contact at the Golden Valley site asked us to come back and meet a few of the dogs who had come down from the neglect case. There were only about 5 dogs remaining and 4 of them were going through their shy and fearful program. There was only one dog - Huckleberry - who they were working hard to find a rescue to take him. Dawn, the vet tech supervisor at the Golden Valley AHS site, was clearly in love with Huckleberry. They asked us for any help we could give them in reaching out to our network. AHS and Jenny (of Leech Lake Legacy) sent out multiple requests on behalf of Huckleberry. About a week ago, we learned that Huckleberry was starting to go stir crazy in the shelter. He had now been in the shelter for 5 weeks .. he was deteriorating and a decision needed to be made soon. The staff at AHS wasn't willing to give up on this guy and as a last ditch effort we reached out to our contact at Home At Last sanctuary. We had no where else to turn and we completely understood if Peggy at Home at Last would not be able to take him. As Jenny always does, she had a long conversation with Peggy and gave all the information we had about Huckleberry and his level of dog aggression. We of course, also shared how incredibly sweet and loving he is and given the right environment (a lot of acreage and someone who was very dog savvy) that Huckleberry may learn to adapt to living with other dogs again. 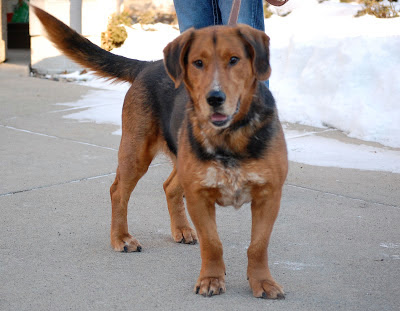 We were ecstatic when Peggy, after asking a lot more questions, said YES!! so yesterday, after Jenny drove to Motley to pick up the big transport of 19 pups and dropping them off at the Buffalo AHS site, we made our way to the Golden Valley AHS site to pick up Huckleberry to transport him to his new home ...

What an incredibly sweet and handsome boy he is!! We can't quite figure out what breed he is ... all we know is he is 81 lbs of cute, uniqueness with a lot of soul and personality! Dawn was there to meet us and to bring Huckles (as she calls him) out to us. The staff at AHS made sure Huckles had everything he needed and he was sent off with a big hug and lots and lots of love.

We took Huckleberry to meet his new mom Peggy. We had two hours of wonderful conversation about so many things (of course, most of it had to do with animals!) and all the while Huckleberry hung out by us and looked up at us with his soulful eyes. Peggy shared with us how she and her husband would introduce Huckleberry to the rest of their pack at their sanctuary.

Today, we got an update from Peggy: 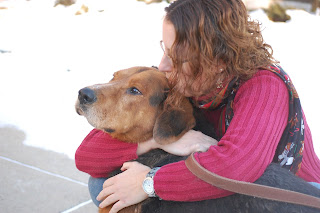 "Huckleberry is home, and it will be slow going for him. He is a VERY dominant guy, and doesn't wait to say hi before inflicting this. With that said, he responds very well to us, so we are taking this very slowly. He has met several dogs, males and females and has figured out we won't let him do anything. He has access to our living room and attached outdoor run when unattended,(he likes the couch, and watched some tv with me this am) otherwise he is on a leash with me everywhere I go, and this technique has proven successful with other recalcitrant pooches. I laughed out loud last night when my short, squat basset mix, Edgar, greeted Huckleberry enthusiastically!  KIN!!

My daughter has been away so will meet him for the first time tomorrow. He will find a very doting 13 year old can be really fun!  Hucks LOVES my husband already--lots of dogs fall for him right away--which has shown us another behavior which is guarding his people. We are very familiar with this, so are not concerned about it at all. He is a darling boy, and we will take all the time it takes to get him in the mix. "

Thank you Peggy (and Home At Last) for taking this incredible boy into your pack and for being willing to work with him so he can adjust to living with a pack again. And thank you AHS for taking him in and caring and loving him so much for the time he was with you ... and thank you for tirelessly advocating on his behalf and for trusting us to find what we believe is going to feel like heaven for him ... that is, once the handsome boy learns, with guidance from Peggy, he must co-exist with the rest of the pack :)

It truly is amazing what we can accomplish when we all work together!

We will keep you posted as we get more updates on Huckles!!

"Happy New Year, ladies!  I thought I would take a moment to bring you up to speed on Huck's progress. He has indeed jumped multiple dogs, but in two contexts: guarding people, and attempting to overthrow. our responses to these situations has been unequivocal, and I can see him beginning to calculate actions. He is not a reactionary dog, and does not just jump into a foray. He tolerates the chaos very well, he seems far more intentional with his actions, and has targeted male dominant dogs. We do not leave him in the group when he is unattended, he still has his living room with outdoor run. (probably watching too much "Law & order, SVU") However, when we are here, he is in the group, off leash, and is rapidly adjusting. He really enjoys the open space and the deer!!!! He is a very boisterous greeter of his people, nearly taking us off our feet! He is so good about taking correction, which makes this  so much easier. So, the cliff notes are that he will be just fine here, and time is the healer of all things. In 6 months, this will be one of the Home At Last veterans, showing new dogs the ropes. So, thanks for trusting us with him!  He is very unique!! I will try to get you some photos of him out and about. "

And an awesome photo of Hucks with the pack after a long day ... see if you can spot Hucks (hint: someone thinks he makes an awesome pillow!!) 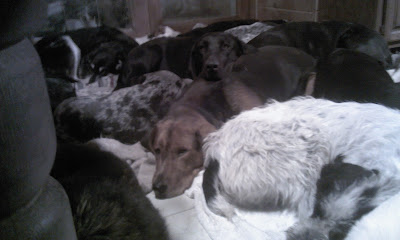 Posted by Marilou at 6:44 PM No comments:

Email ThisBlogThis!Share to TwitterShare to FacebookShare to Pinterest
Labels: Huckleberry

Consider a year-end gift for the animals